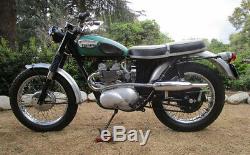 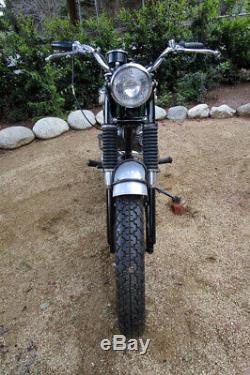 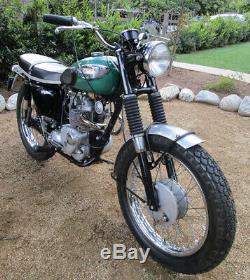 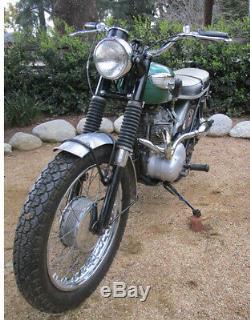 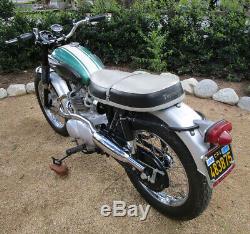 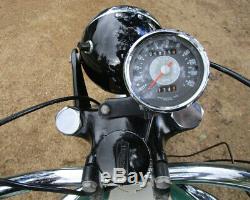 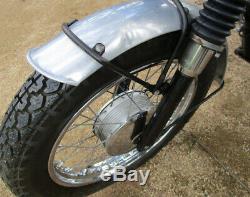 Offered for your consideration is this very clean, original and unrestored 1966 Triumph T100SC Jack Pine Competition model. Frame and Engine Numbers match. Low original mileage showing 5075 miles. Not too many of these early'66 T100SC's were produced, halfway through the'66 season the designation changed to T100C and a new style Fuel Tank was fitted. The SC flat top Tank carried on from it's predecessors from 1963-65 but was unique in the fact it was fitted with the new "eyebrow" badge.

The previous owner told me some cool tales of the fun he had riding around on this bike. It was never used in anger, just used for casual rides through the Santa Monica mountains and such like. It was parked in 1984 and had not run since. After cleaning the Carburetor the bike started and runs great as can be seen in the video below. Original Paint and plating on the Tanks and all Cycle parts.

Nut and bolt stock as standard, all original hardware which is free from spanner marks. Original Dunlop and Jones Rims are excellent with original Spokes laced to hubs which still retain very nice paint.

Still wearing the original Dunlop K70 Tires which came on the bike when new. All Lucas electrics which all function as they should, energy transfer ignition still functions well although the coils are cracked due to age.

Seat offers a very nice profile and provides good comfort, no tears in the cover. The seat cover still displays the Triumph logo, 1966 was the first year the logo was added. All chrome on the bike shines brightly, exhaust and muffler provide a splendid exhaust note. Original Amal Monobloc 376/273 Carburetor.

The bike starts on the 1st or 2nd kick and runs like a champ. It will need new tires as these originals have hardened. Original Girling Shocks perform well as does the front suspension which has received new seals and gaitors. Original paint in Sherborne Green and Ivory, there are 2 small dents visible, one on the top left side and one at the back of the tank hidden by the Tank. The oil tank has some scratches.

Aluminum Fenders front and rear, the front has a couple of small dents and the Headlamp ring has a small ding. The very tip of the muffler is scrapped also. The original license plate and frame are cracked. All of these minor items were from driveway spills that the previous owner told me about.

No other visible damage to note. Overall the motorcycle presents itself very nicely. As stated above the carb was cleaned and fluids changed. The fuel lines had to be replaced as did the fuel Taps as they dripped and were unsafe.

They were replaced with replica taps from the UK. After riding around the block a few time I can confirm that the bike runs well and shifts smoothly. New tires will improve the ride. This motorcycle is unrestored and has been sitting since 1984 so the condition of the engine internals are unknown. As you can see in the video, it starts easily, runs and idles, drips a very small amount underneath after riding.

Original unrestored bikes are becoming more collectable than restored examples. This bike still has many small details that simply get overlooked in the restoration process, after all, a restoration is just the restorers interpretation on how the bike should be finished. This unrestored bike is how Triumph intended it to look and not too many survive in this condition. Although not perfect the flaws it does have just add to the history of this fine machine. Please take the time to study the 40 photographs below as these show the bike very clearly as does the you tube video which includes a good walk around at the end. 1966 T100SC Jack Pine - YouTube.

The item "1966 Triumph Tiger" is in sale since Thursday, April 23, 2020. This item is in the category "eBay Motors\Motorcycles\Triumph\Tiger". The seller is "manxtt" and is located in Altadena, California. This item can be shipped worldwide.